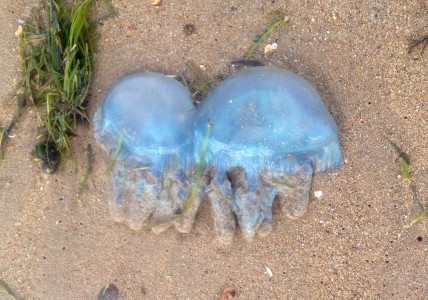 One thing I was quite worried about when thinking about the adventure in Australia.. It wasn’t the snakes, the spiders, the sharks or the drop bears, no it was the heat.

The daytime temperature in some (coastal!) cities around Australia right now is at 44 degrees celsius. In Brisbane today, we’ve only had 30 but that is quite enough. I started my day with a nice long walk along the beach where I saw these happy-old-couple-looking Blue Blubber Jellyfish – this was around 7AM and so it was still kind of comfortable, but later on I just ended up lying in the caravan feeling like I was going to melt through the floor.

Being a Swede, this is supposed to be considered a pleasant problem in early January but I’m not so sure I agree. I’m starting to miss the layers and layers of winter clothing, the wooly hats and fluffy socks. You see, the benefit of a cold climate is that you can always put on more clothes to make it more comfortable. When it get’s too hot, you can only undress to a certain point.

That being said, I can’t claim not to be enjoying the morning walks in the soft sand by the cuddly jellyfish. If you want to play with them, the trick to not being stung is to simply not touch the tentacles – especially the insides of the tentacles, because though they are not considered deadly to humans, they hurt quite a bit. Even after they’re dead. Because that’s what harmless animals are like in Australia – they will hurt you even after they are dead.

That’s all for now!

Spotify Song of the Day: John Mellencamp – Hurts So Good